I can't wait!! Critical Role has gone from home d&d game to their campaign (s1) being made into a cartoon! Coming this month to Amazon Prime. Woohoo!!
But I'm not excited or anything 😛🥳🙃
From Amazon Prime: 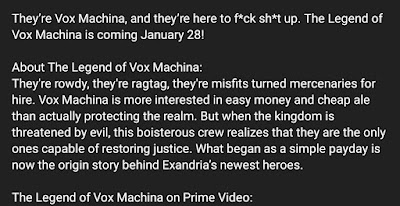 Posted by Kelly/Taiko at 6:19 AM No comments:

The Boys is Binge Worthy

This is my short rant about CBS cancelling Code Black, one of the best shows on television.

Posted by Kelly/Taiko at 6:32 AM No comments:

Netflix's Godless is worth Bingeing

Fantastic series! Classic western feel. Strong women. Excellent actors. This is a limited series on #Netflix. That means this one season is a full story with a beginning, middle and end.

Stars Michelle Dockery, who played Mary in Downton Abbey, in a completely different role. Jeff Daniels, whom I love, is so great. His character isn't the one dimensional bad guy. There's times where you actually like him.

Cinematography is beautiful in this series.

Slight #spoiler
The last episode there's a 20 minute gun fight. It doesn't feel like it because it's done so well. Then at the end there's no talking at all. The last 10 minutes is music over a montage type ending. It's so well done.

Check out "Godless" on Netflix
www.netflix.com/title/80097141?source=android

Posted by Kelly/Taiko at 6:08 AM No comments:

Thoughts from a TV Geek is on a short hiatus. We'll be back this summer!

In the meantime check out all our episodes here: