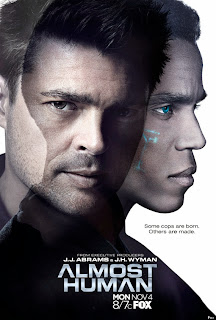 Karl Urban (Star Trek, Xena: Warrior Princess) stars in a new series on FOX, Almost Human. Most people today probably know him as Doctor McCoy in the new Star Trek movies. I however remember Karl from Xena: Warrior Princess, playing Cupid and Caesar. (He also played another character in an early first season episode. He was very young.)

His new show is turning out to be very good. I went in without any expectations and it's got me looking forward to the next episode. J. J. Abrams is an Executive producer which probably put very high expectations on the show from a lot of people. I hope it's living up to them because I'd like to see it continue.


The ratings are holding for the most part, although it has gone down a bit.

According to Deadline Hollywood:


In its second outing on Monday night, Fox’s new Almost Human slipped 17% compared to previous Monday in the demo, clocking a 1.9 rating, and about 6 million viewers, which put it in fourth place among broadcasters on both counts. It held 100% of its audience throughout the hour.  The show also retained 100% of its teen audience, week to week. One week earlier, the futuristic cop drama had logged about 6.3 million viewers and landed in a three-way tie for second place in the demo with a 2.2 rating in fast nationals, tumbling 29% in its move to Monday after a Sunday premiere behind an NFL double-header. Fox projects the new drama episode will climb  to a 3.1 or 3.2 demo rating when Live+7 Day stats come out and estimates the episode will be viewed by more than 14 million via 30-day multi-platform viewing.

New Showrunner hired for Rizzoli & Isles, Jan Nash is replacing Janet Tamaro﻿ who left after season 4. Also, Lee Thompson Young's death will be handled in the first episode of season 5.

In the article below it states that Rizzoli & Isles is the #1 show for TNT, and it's second only to The Walking Dead for scripted series in the history of ad-supported cable television. Not bad, ladies. :)

Doctor Who Needs YOU. #SAVETHEDAY 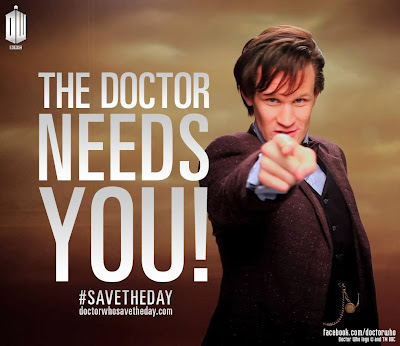 It's 2013, hashtags are a big deal. And the Doctor loves a hashtag – as he explains in this video… http://youtu.be/X80Xq-sHwIw

Show your support by tagging your best and most creative Doctor Who content with #SaveTheDay, and the more you do, the more the TARDIS will build - unlocking sneak peeks from the 50th Anniversary episode www.doctorwhosavetheday.com 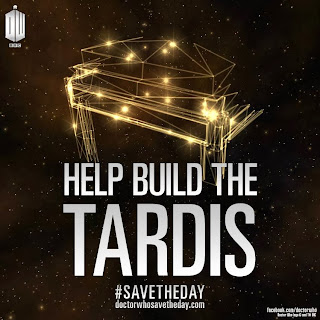 The TARDIS engines are whirring and she's coming in to land… but first, she needs your help.

Posted by Kelly/Taiko at 1:38 PM No comments:

The Doctor Who 50th Anniversary Special materialises on BBC One two weeks on 23 November – that’s only two weeks on Saturday! The BBC has just released a press release containing details of the episode plus interviews with Steven Moffat, Matt Smith, David Tennant, Jenna Coleman and Joanna Page. Here’s the press pack in full:
The Doctors embark on their greatest adventure in this 50th Anniversary Special: in 2013, something terrible is awakening in London’s National Gallery; in 1562, a murderous plot is afoot in Elizabethan
England; and somewhere in space an ancient battle reaches its devastating conclusion. All of reality is at stake as the Doctor’s own dangerous past comes back to haunt him.
The Day of the Doctor is written by Steven Moffat; directed by Nick Hurran; executive produced by Steven Moffat and Faith Penhale and produced by Marcus Wilson. It stars Matt Smith, David Tennant and Jenna Coleman with Billie Piper and John Hurt.

INTERVIEW WITH STEVEN MOFFAT – LEAD WRITER AND EXECUTIVE PRODUCER
Question: What is it like being the writer for the Doctor Who 50th special?
Steven Moffat: Since I was a little boy, the idea of writing a Doctor Who story at all was remarkable enough to me. But writing the 50th special was exciting and terrifying - everything that showbiz should be.
Q. So where did the story for ‘The Day of the Doctor’ come from?
SM: I didn’t want this to just be a celebration of 50 years of the past. I wanted it to be a celebration of the mythology of the legend of the Doctor and all that entailed. This should be the first step on the next journey, guaranteeing the 100th anniversary. The story focuses on the most important thing that ever happened to the Doctor. We very rarely do that in Doctor Who as it’s usually about the people the Doctor meets or the companion that travel with him. This time it’s different.
Q. ‘The Day of the Doctor’ welcomes back the shape-shifting Zygons, a monster we haven’t seen since the 1970s. Why did you decide they were the ones to bring back?
SM: The Zygons without question are a design classic. They are superb; brilliant from the voice, to the appearance. Essentially we’ve resurrected exactly the same Zygon as Tom Baker fought back in the 70s. They are beautiful, and it’ll show that the special looks forward to the future of Doctor Who and also celebrates the legend.
Q. At the end of the last series we were introduced to John Hurt as the Doctor. What does John bring to the role and can you tell us anything about his Doctor?
SM: With John Hurt we have serious acting royalty and that was the intent of John’s character. John is one of the most distinguished film stars of British origin, one of the most distinguished actors this country has produced and has now become part of Doctor Who mythology.