American Idol vs. The Voice - The quality of singers

I've been watching The Voice and American Idol for a few years now and I've notice one major difference in these two singing competitions – The quality of the singers. American Idol definitely loses in the overall quality of singers.

I began watching American Idol once Simon Cowell left. That's not to say I never saw the show. I had family and friends into it and if I was at their house well lets just say “When in Rome...” I never enjoyed it because to me there was a lot of mediocre singers and a couple of really good singers. I remember saying to a friend of mine while watching back in 2008, “They're all singing out of tune. Are they really considered the best America has to offer?” I am a musician and working Wedding and Karaoke DJ, I hear all kinds of singers. There are singers in the clubs that would blow what American Idol considers the best out of the water.

The Voice on the other hand is not interested in showcasing bad singers. You'll notice during the blind auditions no one sucks. Some are far better than others and some let their nerves get the best of them, but they are all very good singers. That's because The Voice singers are hand picked by producers for quality. They have some “open” auditions but most of the talent you see on the show producers have personally picked from YouTube, SoundCloud and other online sites, plus traveling to local clubs. Producers contact the artists to see if they'd like to audition – for the producers not the blind auditions on the show – and then hand pick who they put through to the blind auditions. 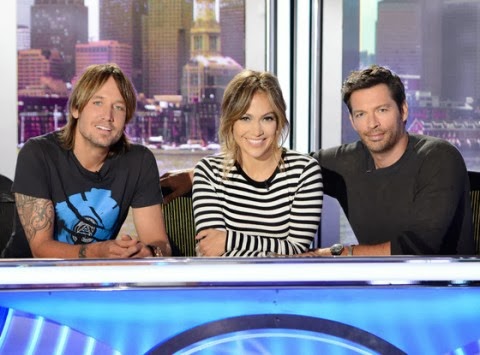 It's similar for Idol, but only in the sense that the auditions are not just what you see on the show. The stadium full of people you see on TV is deceiving. They each have a number and it's a lottery drawing. If you're number is called you get to go audition for judges that are not celebrities. They decide who gets through to audition for the producers and then the producers make the final decision as to who goes in front of the celebrity judges. They purposely take bad singers who make good television. That's a huge difference from The Voice. If they don't call your number you go home without having sung a note.

Now, mind you it's all reality TV and the producers for both shows will take lots of liberties. They're aloud. For both Idol and The Voice it is in the contracts that producers have the last say, even over the voting public. Now I know with Idol a major upset in the voting is great for television and they'll leave it be. However, they know who can ultimately sell albums and go on tour. That is after all the true name of the game - the recording company getting the best artist to promote and sell.

My advice to young people wanting to get on either show is don't go in looking for instant fame. That fame will fade by the time the next season begins. Can you name the top 10 from Season 12? How about 11? Season 10? Probably not. That doesn't mean those artists didn't “make it.” Most did. No they're not all on the level of Kelly Clarkson, but they have careers. If you research, the majority are still in music. Some are on Broadway, some have recording contracts, some are touring, and yes some are back making the rounds at the clubs. That's the nature of the business. So be an artist first. Work on your craft and always strive to improve.

And for viewers, know that both shows are reality television so the way the show edits together is not necessarily how it was all done. That doesn't mean you can't enjoy it, but please, vote for actual talent over looks. Maybe the quality of American Idol will improve to the standard of The Voice if more people vote for actual talent.

Side note: I like the combination of Keith Urban, Jennifer Lopez and Harry Connick, Jr. on Idol. Harry and Keith bring to it the more technical criticisms  and advice which I believe these kids need to hear and learn from, and Jennifer tries to help them all through encouragement, pointing out the positive and letting them know when more is needed. It's interesting that since The Voice – who has coaches not judges – it seems like Idol judges have tried to be more like coaches and help these kids rather than judge them.
Posted by Kelly/Taiko at 12:49 PM